Kwansei Gakuin University (KGU) is an independent institution for higher education, offering bachelors, masters, and Doctoral degrees in over 40 different disciplines to a student body of approximately 23,000. Founded in 1889, the university maintains academic standards that rank among the highest of all Japanese universities and colleges. The Nishinomiya-Uegahara campus is in the city of Nishinomiya, a residential city of 500,000, situated between the cities of Osaka and Kobe. This campus houses six of the eight KGU schools and three independent graduate schools. It also is home to the Contemporary Japan Program (CJP), in which you will be participating.

KGU requires three recommendation forms as part of the USAC application process. One recommendation must come from the home university study abroad office and be based on a personal interview; the other two should come from faculty with knowledge of the student's academic performance and ability. Students approved by USAC will be nominated to KGU for admission; final admissions decisions are made by KGU. 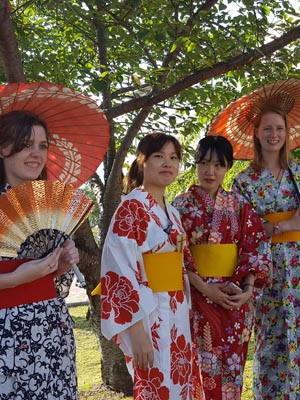