Due to the current world health situation, field trips are subject to change during Fall 2020. Please contact your Program Advisor for more information.

You are encouraged to participate in the organized field trips, which are included in your program fees. In addition to the included program field trips, you'll also have field trips as part of many of your courses and have numerous informal activities that expose you to the local culture as well. Destinations may change at the discretion of the Resident Director.

Visit the most famous places in the city such as the Bund, the Pearl Tower, Yu Garden and Bazaar, and the Shanghai History Museum where you will get a sense of Shanghai’s past, present, and future.

Located southwest of Shanghai, Hangzhou served as China’s capital during the Southern Song Dynasty. The islets, temples, pavilions, gardens, causeways and arched bridges of jade-like West Lake are the supreme example of lakeside beauty in China.

Located on the canal between Hangzhou and Beijing, Xitang people still live in hteir centuries-old houses on hte water, practicing the ancient customs of many water towns in the Yangtze delta. Arched roofs, lofty gables, stone bridges, and green willows lining the banks can be found almost everywhere in town. In 2005, Paramount Pictures sho the canal scenes for Mission Impossible III in this water village. 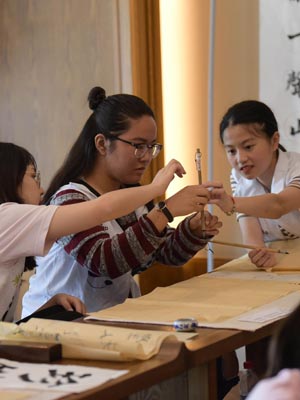