L’Université Catholique de Lyon (UCLy), or Lyon Catholic University was founded in 1875 and specializes in subjects such as science, language, law, economics and social sciences, and theology and religious sciences. While the university is religious in origin, all students are welcomed by its “spirit of openness”. The university has two campuses, both of which are on the Presqu’île at the heart of Lyon, on either side of the Perrache train station which connects Lyon to other cities in France and beyond. The Carnot Campus is on the northern side of the train station, on the lovely Carnot Square which hosts farmers’ markets on Wednesdays and Christmas Markets in the winter season. Your language courses and the USAC Lyon office moved to the St Paul campus. The Saint-Paul Campus is on the southern side of the train station and is a visual icon, combining modern architecture with a renovated 19th century prison. The Saint-Paul Campus is home to the colleges of law, economics, and social sciences, and also where you will find student services, gym, student health center, and chapel. University libraries and cafeterias are available on both campuses.

The university has a vibrant student life with frequent cultural events and activities. You can get involved in several sporting activities or student organizations. These provide great opportunities to meet French students and practice your language skills in a more natural environment. Clubs on campus hold events such as free movie nights, student debates, and volunteer days.

Minimum GPA: 2.5, one year of college-level French if studying French; no language prerequisite for Art History 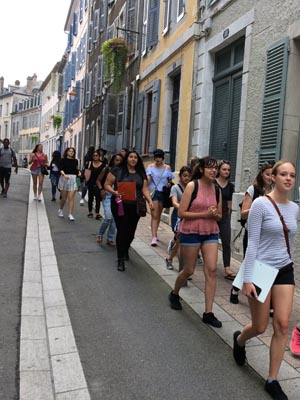