Field trips are subject to change. Please contact us for more information.

You are encouraged to participate in the organized field trips, which are included in your program fees. In addition to the included program field trips, you'll also have field trips as part of your courses and have numerous informal activities that expose you to the local culture as well. Destinations may change at the discretion of the Resident Director.

Visit the biggest panda research base in the world. See the relaxed adult and playful baby pandas and learn more about this “living fossil” and endangered animals.

Explore a typical Sichuan-style ancient village often used in Chinese historical films. There you will have lunch and depart for a boat trip up the Yellow Dragon River.

This is a weekend trip to one of China’s four sacred Buddhist mountains. See Dafu, the world’s largest sitting Buddha (over 100 people can stand on his foot!), and Thousand Buddha Cliffs. Spend the night at Emei. The following day you will climb part way up the mountain to the 1,000-year-old Wangnian Temple, the oldest surviving Emei monastery, and enjoy their famous vegetarian food. Visit Qingyin Pavilion, named the Pure Sound Pavilion because of the sound effects of rapid water coursing around rock formations in the area. Up higher, you will have the chance to see the wild monkeys for which Emei Mountain is famous.

Taoping Qiang Village is known as the “Ancient Oriental Fortress” for its aged stone houses. You will experience the difference culture from main stream in China. Located 197 kilometers far from Chengdu city,Dujiangyan Irrigation Project is the oldest and only surviving no-dam irrigation system in the world. It is honored as the 'Treasure of Sichuan', which still plays a crucial role in draining off floodwater, irrigating farms and providing water resources for the province. Near Dujiangyan is Mt.Qingcheng, one of the most famous Taoist mountains in China. It is dubbed 'the most peaceful and secluded mountain under heaven' and combines perfectly with its evergreen scenery.

This museum is near an archaeological site that dates back to the Neolithic, Shang, and Zhou periods. The site has been declared a National Key Cultural Relics Protected Unit, due to its scope, the wealth of its contents and the rarity and precious nature of its excavated objects.

Explore a typical Sichuan-style ancient village often used in Chinese historical films. You can also enjoy the weekend the way locals enjoy theirs.

Luodai Ancient Town is the largest Hakka community (one of the ethnic groups in China) in southwest China. Hakka (one of the ethnic groups in China) communities tend to be set away from metropolitan areas; the fact that this Hakka town is so close Chengdu is unique and provides access that would otherwise be quite difficult. Most of the existent architecture in the town is in the style of the late Qing dynasty. With its well-preserved Hakka culture and well-known annual Fire Dragon Festival, Luodai Ancient Town enjoys a reputation as the best Hakka town in western China.

The museum was built over a five square-km excavation site which was discovered in 2001 in the western suburbs of Chengdu. The Jinsha Site is the most significant Chinese archaeological discovery of the twenty-first century. Thousands of gold plates, jade articles, stone wares, bronze wares, and ivories from the Shu Kingdom were uncovered and are now featured in the museum. Among them the Holy Sun Bird is the most famous—it has become the symbol of Chinese Cultural Heritage. 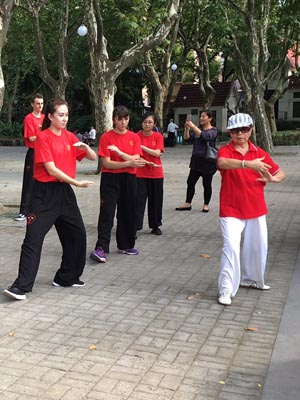